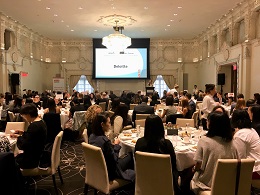 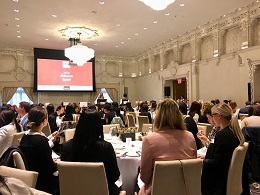 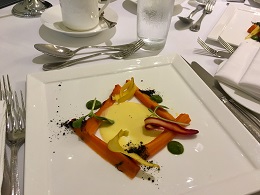 On June 20, 2019, the Association of Women in Finance hosted the Annual Real Estate Forum at the Rosewood Hotel Georgia. Thanks to the support of the AWF community and our sponsor, Deloitte, the event was a success. After a brief session of networking and a delightful lunch served in the Spanish Ballroom, the panelists began their presentations.

The panel’s consensus was that the BC economy is in a downturn. The main themes discussed included inventory supply vis-a-vis population growth, anti-money laundering and affordable housing.

Asked about the stage of the current downturn, Ms. Podmore-Russell explained that there are many reasons to be optimistic in Vancouver and that, 6 months into the downturn, we should expect things to pick up soon. Supply of inventory vs. population growth was a topic brought up several times throughout the discussion. It was noted that the supply of housing remains low as Canada continues to attract global talent and immigrants to the country. Further, developers have been revising and delaying their development plans which has been taking away from city growth.

With respect to money laundering, Mr. Kwiatkowski’s view was that the topic is more of a distraction, and not the key issue which appears to be supply and demand. Ms. Costello added that a red flag for potential consideration by the Government includes the same companies owning various properties with the same type of title across various owners. She further pointed to the untapped potential of analytics involving the Land Title and Survey Authority of BC data.

According to Mr. Kwiatkowski, housing is likely to become more expensive due to the restriction on land. As he explained, for a family to afford a single family detached home, the price would either have to drop by $800k or income to quadruple. As condo units in Vancouver have reached a price of $2,000 per sf and this price is only affordable to a small percentage of the population, the panelists expect the neighboring municipalities to inflate housing prices as demand increases. From a development perspective, detached single family homes have become unaffordable for the majority of new home owners. As such, developers are focused on building communities with small residences that still give homeowners the opportunity to entertain and have a reasonable standard of conveniences.

On behalf of the AWF, thank you to our audience, sponsors, panelists and volunteers for yet another successful Annual Real Estate Forum!